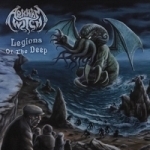 UK’s old school Heavy Metallers / Doomsters ARKHAM WITCH’s 2nd album "Legions Of The Deep" is the kind of record that is meant for sheer entertainment for some beer-reeking fests, in which you can basically do three things with a bunch of your closest and like-minded friends: drink beer, get shit-faced and enjoy some late 70s and early 80s tinged proto-Doom Metal / NWOBHM stuff. To me ARKHAM WITCH is simply a perfect candidate for taking over the turntable for that kind of a bit more "restless and relaxed" activity. ARKHAM WITCH have something strangely appealing in them, which allows them to rock your socks off and mess your head – without even that much of effort at all, pumped into your engine. Everything in ARKHAM WITCH basically represents some timeless yet rockin’ Metal music where one is able to hear bits and pieces of bands like CIRITH UNGOL, early PRIEST, BLITZKRIEG, WITCHFINDER GENERAL and the likes. On the "Legions Of The Deep" record this foursome shows that you really don’t need a big truckload of different musical ingredients to make your package work for people; sometimes just a minimal effort of work is enough to fill the needed space in a song, giving the listener what she / he truly needs – and that’s it. Also, having an ability to change your colors like a smart chameleon whenever that is needed, is a good thing too. In a song called ‘On A Horse Called Vengeance’ ARKHAM WITCH have found a gear to Thrash mildly – and they just let their steam burst out freely in this track, without holding back a slightest. And is there more on this record that may turn some heads shamelessly towards their side? Yes, in fact there is. As for starters I would recommend to listen to the whole record from beginning to end – and right after that, chances are that you may wonder why on earth you are holding a bottle of beer in your hands. Remember who told you first "Legions Of The Deep" is kind of an extraordinary good record… I mean, giving you some poor and / or good excuses to arrange liquid-filled parties for your friends in particular at least. ‘Eat a bowl of fuck… I came here to parteeee…’ Band page: www.reverbnation.com/arkhamwitch, label: www.metal-on-metal.com