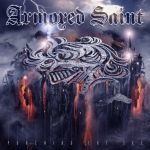 I have seen people absolutely raving about this album everywhere. Therefore, I’m going to start with the best I have to say. This is a highly professional album, with truly first class technical delivery, wonderful production, the highly competent vocals of John Bush, remarkable lead guitars, an extremely solid and versatile rhythm section, a varied set of songs. But I must be absolutely honest, and listening to this in the most objective way, this is a mishmash of highly radio playable songs that to me sound far more Rock than Metal. I knew that the ARMORED SAINT of the eighties were long gone, but the distance they went astray is really too much for me. After the Celtic-style intro with bagpipes, straight away there is too much of a la-la feel to it, and then we further descend into the depths of extreme commercialism, along an album that is much of a hybrid. It is not so much the modern Metal influences that bother me, as they are not even so very much present. And sure, it is often speedy, and heavier than most Rock bands you can come across these days. Some songs can pass for Metal with a little effort of the imagination, such as ‘End Of The Attention Span’ or ‘Missile To Gun’, with its remarkable guitar work. But then stuff like ‘My Jurisdiction’ I can only imagine will be of appeal for old Grunge fans, or the poppy Rock of ‘Fly In The Ointment’ leaves me wondering how watered down and flexible (read meaningless) our definitions have become. This album may be an achievement in the Rock path this band has decided to tread years ago, or perhaps a logical progression down the decades from the particular brand of Heavy Metal they had from the beginning, or maybe they are aiming for stardom or even just aging and going softer. But this is definitely an album for the musical mainstream (I couldn’t disagree more with what Ricardo wrote – this album might have a lot of melodies and yes, a couple of modern influences as well, but to me it is one of the best ARMORED SAINT albums in years! There’s so many details to discover, so much variety in the songwriting and all that without ever denying the band’s roots! ARMORED SAINT always added new little bits and pieces to their trademark style, but never to the extend that they betrayed or disappointed their old fans! What you hear is always 100% ARMORED SAINT and this new album is no exception! They just keep marching on and “Punching The Sky” is nothing but ARMORED SAINT at its very best! – Frank). If you are a wide-range music lover, give it a try and check www.facebook.com/armored-saint-133222922845, www.metalblade.com