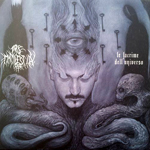 The time has come for the third sonic attack from the Italian one man Black Metal force ARS MANIFESTIA, the first release for the quite new Norwegian label Obscura Lyd Productions (which I presume is Harmful’s own label, as he now is residing in Oslo), whereas the two first releases from the band were on the Spanish label Black Seed Productions. There has been some progression going on since the band’s inception back in 1999. The first album "The Enchanting Dark’s Arrival" was recorded on a four track recorder, and is despite the rumbling and thin production, quite strong and atmospherically trance inducing. This new abomination follows quite well upon the path laid with the second record "The Red Behind", an atmospheric journey into the unknown darkness, created by captivating song structures, quite strong melodies and a heavy ambiance. Even though the songwriting is good, and that it is hard not to get sucked into the somber universe of ARS MANIFESTIA, I still miss some madness, some chaotic unforeseen madness, the sudden blast of carnage, as another band of ambiance and atmosphere, the French maniacal madmen DEATHSPELL OMEGA, masters. Such would have lifted the whole experience to new heights. "Le Lacrime Dell’Universo" which is translated into "The Tears Of The Universe" is a quite fitting title for this atmospheric encounter, as there is a sorrowful melancholic ambiance over the music most of the time, a fitting title to an album fitting for a gray and rainful day here in the North. Not as dark and depressive as some of the music in this end of the Black Metal specter, though still a nice record for a day of deep thoughts and solitude. Though as written, a bit too streamlined and thought through to bear the 73 minutes it lasts, a few sudden surprises would have lifted the experience quite a lot and made the record more lasting. That said, it is still a stylistic well done album, fitting for some days. www.facebook.com/pages/ars-manifestia/135786133263401, www.obscuralyd.no