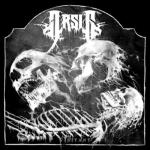 I can remember I was quite stoked when I first laid ears upon ARSIS’ debut album "A Celebration Of Guilt", back in 2004, when it was released by Willowtip Records. If I followed the band for a while, or it was a one-review relationship I can’t remember to be honest, though fast-forward to 2018, where I was handed the new album by the Virginia, USA based ARSIS "Visitant", their first recording for Polish Agonia Records, after a three album date with Nuclear Blast. There have been a good deal of members in and out of the band the last 14 years, actually only mainman James Malone is left from the recording line-up from "A Celebration Of Guilt", though as he is handling guitars and vocals, and most likely also the songwriting, the band has been able to keep their style quite firm since the inception. We are getting anger-filled melodic Death Metal with quite a technical twist to it, and screamy growls. The songwriting is good, the songs are flowing organically all the way through the record, despite all the technical breaks and fast progressions. The musicansship is displayed well, especially the guitars are playing a lot around, and not that the rhythm section leaves anything behind to wish for either. I know this quite sterile and clean sound fits this kind of music, as it it easier to keep the instruments and sheenanigans separated, though a warmer and more punchy sound would have fitted this album. The drumsound becomes quite annoying in the length, the top notes of the guitar screams a tad too much, and when the bass a seldom time pops through the sound picture and rumbles, it actually works quite good. A good album for all you people into this type of Death Metal, as it is a well written and performed album with some good power and energy behind it, the band consists of some angry and talented guys, that’s for sure! More noise at: www.facebook.com/arsis, www.agoniarecords.com