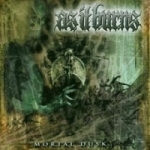 This is Groningen’s AS IT BURNS third album release and I think it is possible that they might access a larger audience with their well-balanced mixture of Thrash / Death / Black Metal. The range of guitar riffing varies from dark melodies to rocking parts to fast, Death and Thrash orientated attacks. AS IT BURNS are not afraid of using a keyboard, but only in an unintrusive relation to the rest of the music, most of the time it operates in the background and gives atmospheric support. The guitars dominate the keyboard and not the other way around. The vocals are both Death and Black influenced and absolutely fit to the instrumental efforts. To give an abstract comparison, imagine Without Temptation were a real Metal band, haha, with a brutal male shouter, AS IT BURNS would be their much, much harder and faster brothers. To sum it up, AS IT BURNS do not invent some new kind of genre but they mix many interesting influences and offer a good album. Band webpage: www.asitburns.nl.