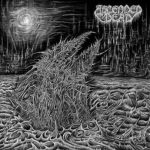 The San Diego based Death Metal outfit ASCENDED DEAD is around since 2011 and put out some “small stuff” since then. Among these releases are a 7” EP (“Arcane Malevolence” in 2014) and some tapes. In 2017, their work in the underground lead to a first full length album that is here in my player right now. “Abhorrent Manifestation” is a joint effort of two labels, Dark Descent for North America and Invictus for Europe. The album features five completely new songs, four songs from their former releases and a cover tune. And ASCENDED DEAD won’t take any prisoners from the first riffs of ‘The Promised Time’ onwards. Fast Death Metal is the game the band plays, the American way, of course. But it’s neither the old school of Florida nor in the way of acts like INCANTATION who defined Death Metal in a different way. The best comparison for ASCENDED DEAD are good old masters POSSESSED, who played in a similarly furious, sometimes unorthodox thrashing style. Thus it’s, by the way, not a big surprise that the chosen cover tune on “Abhorrent Manifestation” is ‘Last Ritual’, a pretty unknown 1993 demo track of the coinventors of Death Metal. But I should return on focusing on the original ASCENDED DEAD stuff here, since this one is interesting enough to talk about. Based in the already mentioned very old school of Death Metal, the four piece comes along very brutal and uncompromising. The sound is unpolished and pretty dense at the same time and the stuff is garnished with a voice that always made me think of Martin van Drunen with laryngitis. In the long run, the vocals are pretty demanding, but that goes for “Abhorrent Manifestation” in its entirety, for this is not an album to listen to while doing other things. But if you give the album some time and do not expect technical finesse or pieces of skill, ASCENDED DEAD should charge your open door. They did charge mine. Find out more at www.facebook.com/ascended-dead-365392833471969, or visit their labels: www.darkdescentrecords.com or www.invictusproductions.net