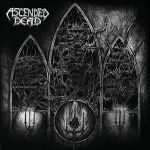 I’ve had the pleasure of witnessing an ASCENDED DEAD gig a few times now and I think their skills improve with each live performance. They recently completed an American tour with WARPVOMIT, another young and talented band from Washington. So things are definitely looking up for the ASCENDED ones. Apart from a couple of demo tapes this is the first EP for the band. It hits the ground running. The 4 songs paint a grim picture, a resonant web of dark vibrations. The vocals sound frenzied and tortured, as if the singer is a madman, terrified and thrilled at the same time. What I like best about this EP is that it’s never uninteresting, always gunning for a visceral feeling. I think this quality is best demonstrated by the songs ‘Arcane Malevolence’ and ‘Ensnared for Eternity’, which smashes into being like a Death Metal march. I can see anyone with a passion for old school Death Metal like IMMOLATION, KRISIUN, and "Diabolical Conquest" era INCANTATION this is for you. The intensity seldom relaxes, and then only because it’s part of a song’s make up, like the last one ‘Blood Consecration’, which has an excellent solo and rhythm or the second song ‘Emanation From Below’, which also has interesting riffs that showcase the band’s ability to vary their style. It’s catchy, memorable, and probably more complex to execute than it seems. If I had to isolate a favorite song it would probably be ‘Ensared’ but there are so many other parts such as the end of ‘Blood Consecration’ that are just excellent and will leave the listener curious for more. Do not idly brush past this release! www.facebook.com/pages/ascended-dead/365392833471969, www.bloodharvest.se