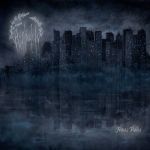 ASPHODÈLE is a French Post Black Metal band and this is their debut album. Even though it is a new band it does, however, gather people with a long curriculum in the scene, like guitarist Stéphane Bayle of ANOREXIA NERVOSA (I still have a NECROMANCIA demo sent by him decades ago), Christian Larsson, who played bass in SHINING, or Audrey Sylvain doing female vocals, who was involved with AMESOEURS or PESTE NOIRE. The music here is seldom slow but it is very depressive, which seems to be the point of the whole concept of the band (even the cover artwork is extremely gloomy, together with the title meaning “pale days”). Musically, it is well composed and played and very musical, with female clean vocals and male both clean and aggressive singing. The guitars go from the Nordic school to much more melodic stuff, and indeed you keep going from one thing to another throughout the whole of the album. Drums and bass also do a remarkable work. For an old schooler like me, I guess the female vocals and the calm spoken parts may vaguely remind a bit of the time when CELTIC FROST were creating Avantgarde Metal, but this is more melodic and much more modern, going Goth Rock on occasion and alternating with more aggressive Metal parts. It’s very well produced and it does convey a permanent melancholic state of mind. If you are into stuff like ALCEST or LIFELOVER chances are you will enjoy this, so being the case give it a go at: www.facebook.com/asphodeleband, www.lesacteursdelombre.net