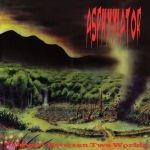 ASPHYXIATOR from Birmingham, UK was active between 1993-1998. In 1997 they released their debut and only official full length “Trapped Between Two Worlds”. Without any further growing up, the band split up just after that. Time marched on and in 2020 “Trapped Between Two Worlds” aged 23 years old. The almost inevitable was happening and ASPHYXIATOR might have remained one of many Death Metal bands that were left to wallow in obscurity. But they surely stood the test of time. Vic Records now decided to re-release this lost record, which was remastered by Achilleas Kalantzis at Suncord Audiolab (VARATHRON, SACRAMENTUM, BENEDICTION). The first thing to take notice is the very unusual album cover, which invokes wild visions and imaginations of possibly what it visually means to be trapped between two worlds. Sound wise, ten tracks including one bonus track here contain those movements, transitions and atmosphere from classic eras, that give a blood-rushing and engrossing listening experience. The vocals remind of Barney Greenway back in his early days. The guitar tone is really thick, as it’s typical for old school Death Metal and some of the riffs are quite infectious. Also, many passages are memorable, like the clean guitars they implemented on ‘Serial Killer’, which later develops into a furious attacking song dripped with ominous layer of synth behind. Going further deep, ‘True Fucking Hate’ can be regarded as an absolute hate anthem, which builds on in the thrashy vein of SLAYER, then turns into a beastly of a track with the vicious vocal deliverance and possibly the most enjoyable bass drum sound in the whole record. No doubt, it smells classic Death Metal. ‘Struggling’ continues in the same vein of mid-tempo onslaught, before the invasion comes up with ‘The Day That I Died’, which shows their strong BOLT THROWER influence. The damned death scream at the very end captures the dread and paranoia of existential crisis thus reflects the essence of this record. Not surprisingly, the Brits play some eccentric solos on many occasions, which are carefully placed on most tracks, especially on the opener ‘Night Stalker’, ‘Serial Killer’ and ‘Shattered Existence’, are enough to feel thrilled and also contemplate. In the whole record, the blast beats and drum fills are enjoyable, even if the double bass sounds like typewriter clicking on many parts. No wonder, the album’s big problem was with the bass drum sound, which eventually received loads of necessary treatment on this re-issue. It’s certainly one thing that can divide opinions, but in terms of song writing and vision, this is a pretty thought-provoking piece of obscure British Death Metal, that followed the best of traditions. This remastered version that comes with restored artwork from the original, shall entice many new listeners and deserve many spins, to understand why this record stood apart from many other renowned Death Metal records released in the post 90s era. Explore more about the band and label here: www.facebook.com/asphyxiator-117420245022978, www.vicrecords.com.