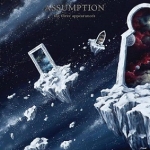 Let’s have a look at this band name before we talk about the music – ASSUMPTION – are you kiddin’ me? In my gore-soaked rulebook of Death Metal, “assumption” is not a thaaaat evil word, so here’s my tip for all the kids out there intending to form sick bands such as PRONUNCIATION, CONNOTATION, ANNOUNCEMENT or DISSERTATION – these are not good monikers, MENSTRUATION sort of works though, at least if you’ve got a feministic approach. But apart from this little funny detail, this 2011 formed Italian act consisting of Giorgio and David (both also in HAEMOPHAGUS, MORBO) stands for dead serious Doom / Death Metal business! “The Three Appearances” is perfect fodder for fans of INCANTATION – very Pillard-ish low growls, typically Finnish gloomy atmospheres, extensive Doom passages, which by far are not as dragged out as in the bands mentioned on ASSUMPTION’s bandcamp (DISEMBOWELMENT, ESOTERIC, THERGOTHON) rather more to the point and effective, just like in DISMA for instance. “The Three Appearances” grooves, has eruptive fast moments, a dark almost psychedelic ambience in its more spacy sections and despite a 7+ min slow-to-mid tempo crawler (‘Veneration Of Fire’) and almost 13 min long title-track proves very accessible. The shorter opener ‘Moribund State Shift’ is an ideal summary of ASSUMPTION’s undeniable qualities and the closing song ‘The Non-Existing’ even sports this stoic, hypnotic heaviness of MOONDARK. Certainly, not an all too sophisticated, inventive release, however an extremely enjoyable one, endless tides of pure darkness await – despite that name, hehe! Please listen to it here: http://assumption.bandcamp.com. Order it here: www.elektroplasmamusik.eu