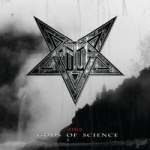 Thinking of Scandinavian Black Metal, Denmark is not the first country that comes to mind, nor it is second or third. ATIUS, hailing from the area of Copenhagen, try to change that fact. After a demo in 2005 and shrinking from a five- to a three-piece, they released their self-financed first album "Gods Of Science". The fine opener ‘Descending To Triumph’ comes along rather slow-paced with a lot of influences from traditional Metal, before ‘Condemned’ and ‘The Forsaken’ start to blacken the sound more and more. Fast, yet melodic parts alternate with slower, more traditional parts that sometimes remind even of bands like IRON MAIDEN for a second. All this sounds like I try to describe the last DISSECTION album, and indeed ATIUS often remind of Jon Nödtveidt and his troops, especially Morten Jensens vocals. Yet ATIUS are more based in traditional Metal sounds, which leads to another nice surprise like the acoustic middle part in the title track. Sadly the next tracks are not as good, lacking a little bit of surprises. But the epic conclusion ‘Soundless Decay’ compensates for this little anticlimax, being one of the definite highlights of "Gods Of Science". As I said, this Danish dynamite has quite a few parallels to the last DISSECTION releases, but they are definitely no copy cats. Oh, and before I forget: the production is pretty okay for a self-financed recording, I’ve heard recordings sounding worse these. If you like bands with a personal note, check these guys out at: www.atius.dk, or visit (and like) their facebook-page: www.facebook.com/pages/atius/235098796852