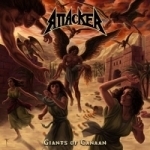 US powerhouse ATTACKER is one of those rare bands that have – more or less tragically, lost many of their band members. Ffirst vocalist John Leone in 1994, followed by guitarist Jim Mooney in 2000, then in between 2009 – 2011 they even lost ATTACKER’s first bassist John Joseph and guitarist Tom D’amico, who played on the "Second Coming" record. Someone would easily think these types of very tragic loses are simply too much for any band to swallow, putting the final end to activities of any band. Well, not for ATTACKER though: the band has obviously been baptized and hardened in the flames of hell over the years, or so it appears that way anyway. Also, vocalist Bob Mitchell who had sung on ATTACKER’s 3 out 4 previous albums, left the band behind him in 2008 for good, after a well-received show at Keep It True festival in Germany, in April during the very same year. In March 2012 things start falling into right places for ATTACKER, and the band gets a solid line-up together somewhat painlessly. Who could have been any better candidate to take Bob’s place in vocals than Bobby "Leatherlungs" Lucas, who had previously shaped his voice in such bands as SEVEN WITCHES, OVERLORDE, JACK FROST and so on. After countless of hard and intense training sessions, the band was ready to come back to the limelight again, ATTACKER’s fifth studio album in order, titled "Giants Of Canaan" being the result of these merciless and fruity rehearsal sessions. What we simply have here – and without even exaggerating too much either, I sincerely gotta say I do enjoy ATTACKER’s latest baby most: it’s just strongly riff-tastic, in which the main emphasis is both on the easily hitting riffs and Mr. "Leatherlungs" incredible vocal parts. Overall said, ATTACKER are truly on fire on their "Giants Of Canaan" album: the vibe, the feeling and the dedication to create their best work to date, have paid off for them greatly, I must say. "Giants Of Canaan" resembles me strangely 2 other albums that almost recently were brought to my mind: namely HELSTAR’s 1989 album "Nosferatu" and GRIFFIN’s "Flight Of The Griffin", added with a bit more modern touch, MAIDEN-esque approach that is also supported occasionally by violent thrashy riff fests. The balance between faster and more violent and vicious tempos – and calmer, let’s-take-it-easy moments, is something the guys in ATTACKER have given a lot of thought as well, when laying down the songs for this absolutely fantastic opus. The two opposite song examples could be a song called ‘Hammer’, in which ATTACKER use ruthlessly their secret yet so powerful kill-’em-all weapons the best they can, hammering down everyone (metaphorically speaking of course) – and then a song called ‘Glen Of The Ghost’, that appears to represent ATTACKER’s softer side for some truly heart-melting, singalong type of catchy melodies. In this very tune Bobby reminds me of Bruce Dickinson at places but also James Rivera (HELSTAR) – and even momentarily Harry "Tyrant" Conklin (currently in SATAN’S HOST) here and there, too. The best song was saved for the last, I see. I could keep on throwing a few more extra superlatives high in the air, and especially toward this particular record here in question but I think I will save you from my prolonged agony and simply cut this short by stating shortly yet very shamelessly the following: "Giants Of Canaan" is most likely the album of the year 2013, dear folks. More about these true kings of aggressive US Power / Heavy Metal, at: www.attacker.tv, label: www.metal-on-metal.com