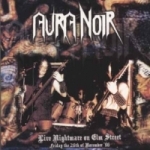 I gotta confess that I missed out on a lot of releases by Norway’s blackened Thrashers AURA NOIR ever since their cool "Dreams Like Deserts" EP from 1995, but all of the songs that I did manage to hear every now and then still sounded pretty good to me… That also goes for this live album here (recorded at Oslo’s Elm Street club, way back on November 26, 1996), which offers one hour of pure mayhem. The band furiously rages through a 14 song set and definitely took no prisoners, that’s for sure! While listening to the disc I noticed something which I wasn’t aware of before for some strange reason and that is how close AURA NOIR actually is to old VENOM! The vocals sound 110% like good old Cronos and the chaotic, raw attitude in their Thrash attacks often recall the legendary Hammersmith days of UK’s unholy trinity. Amazing! So, no surprise that the "Black Metal" classic ‘Heaven’s On Fire’ made it into the setlist as well this night. Add to this a couple of classic DESTRUCTION riffs as well as some old KREATOR aggression and you are already pretty close here. A bunch of pictures as well as a short history piece complete the overall very positive impression of this release.