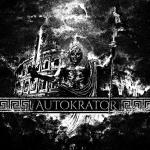 The French outfit AUTOKRATOR hasn’t formed to create easy listening music. The self-titled first album of this new band already shows a very own way of reaching for the utmost extreme in Metal. Death Metal with a touch of Doom and really deep growls are only the base of AUTOKRATOR. Add some industrial sounding staccato riffing that reminds of MESHUGGAH, the menacing atmosphere of MORBID ANGEL in their “Domination” era and a the gigantomania of the Roman Empire and you have a not too vague impression of the sound of AUTOKRATOR. The result is more than puzzling, it’s even disturbing and threatening. The monotony of the songs is as much fully intended as the even metallic rawness of the production. Even though all these mentioned trademarks make AUTOKRATOR a stand out band of the present and a hope for the future of extreme music, I still try to make my peace with this album. Maybe it’s the industrial atmosphere of the album, maybe the concomitant monotonous riff attacks that still makes it hard for me to get at even with AUTOKRATOR. Yet it is hard to deny that songs like ‘Act 1: The Tenth Persecution’ or ‘Act 5: Qualis Artifex Pereo’ are unique and headstrong enough to get and keep this band on radar. Additionally, AUTOKRATOR are another fine example for the fact that France has one of the most innovative Metal scenes at the moment. So, it would be a good idea to check out www.facebook.com/autokratormetal or www.thirdeyetemple.com