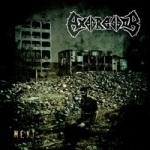 Bullet straight between your eyes… Yes, you – you’re the next one on the list of eliminated people. The beer and bullet belts smelling Finnish Thrash quartet AXEGRESSOR have finally unleashed their long-awaited 2nd armored beast titled aptly "Next", which contains 9 new, viciously executed Thrash cuts – reeking severely of warmongering, violence, justification of killing and other wonderful things of life. We all like the type of things that our four Finns in AXEGRESSOR adore and speak for, don’t we? Eh, either way nothing can change the fact AXEGRESSOR are only getting better from release to release. The band’s debut album, "Command", that was catapulted toward our homes in 2009, already did enough to wreck and mangle many of our peaceful homes to a fine dust, but that’s what we were asking for. "Next" is a step forward from AXEGRESSOR to complete their (hate) work against / for us; more aggressive – more intense – way more murderous and overall a bit more matured package than its predecessor as wholeness. Now it all sounds like the AXEGRESSOR blokes have this seek’n destroy mentality completely absorbed into their newest opus the right way; the way that makes you want to think of your always so helpful and lovely neighbors as your worst enemies for no reason (well, perhaps a teeny-weeny clumsy metaphor in here, but at least you got the picture, right?). AXEGRESSOR come and punish you right from the 1st track ‘The Only Reward’ all the way to the last track ‘Black & White Death Race’, without feeling guilty for doing so – and one cannot help admiring how well they have adopted some of that old school-ish Thrash sound into the material on "Next", occasionally bringing such names as KREATOR and SLAYER in ferociousness especially – as well as SODOM in rawness and filthiness, to minds. The right attitude and determination to sound like a Thrash band is definitely in AXEGRESSOR’s tight possession better than ever before, and there’s no way "Next" would be left totally ignored by the Thrash Metal loving community – I mean, if they like to hear and enjoy their Thrash frenzied, riff-tastic, well-executed and coming with a stellar production. And that’s exactly what they get on "Next". In conclusion it can be only said that AXEGRESSOR’s war march still continues victoriously on their 2nd full-length attack – and don’t forget that you’re their target next. www.myspace.com/axegressorthrashmetal, www.dethronemusic.com