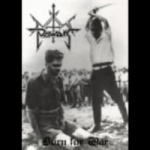 I love those Swedes and they really impressed me with their 2 regular CDs “Pure Slaughter” and “Marching Towards Destruction”. “Born For War” is a compilation which includes the 5 tracks of their unreleased “Born For War” EP recorded in 2001, the cover ‘Twisted Mass Of Burnt Decay’ from their “Pure Slaughter” sessions in 2005, the 2 songs from their “Tribute To I17” split-EP 2003 (with BESTIAL MOCKERY), the 2 songs from “Fresh Human Flesh” split-EP 2003 (with ILL NATURED), the 4 songs from their “Evil Warriors” EP 2000 and a couple of rehearsal tracks from several sessions. Usually I’m quite sceptic about those compilation CDs as they often only offer remainders of their CD sessions which is luckily not the case here, not when talking about the studio recordings. I don’t want to lose many words about the rehearsal tracks as the soundquality is rather lame, but normal for rehearsal recordings. Here I see no sense in releasing such songs on a CD as the band has quite a lot of better recordings to offer. Anyway, subtract those rehearsal songs from the regular playing time you still have 46 minutes of great Swedish Death Metal brutality offered by one of the best and most underrated Swedish Death Metal bands to date. By the way the last song on the unreleased “Born For War” EP is a coversong called ‘Yellow Submarine’ and I guess you know the originators of this song and I’m sure you think the same than me at first that this song can’t work in a Death Metal version. Actually it can work and sounds really great. Some of the songs featured here are included on their “Pure Slaughter” record, too, but in a way those songs found on “Born For War” sound even a tiny little better than on their debut album. To come to an end I can say that “Born For War” is a great compilation CD worth the money and a prove for all Death Metal fans that there’s quality behind every release of AXIS POWERS. Well done, guys. Available for 15 USD (including a patch) or 12 USD (without the patch) through Dibbuk Records from Mexico (www.myspace.com/dybbukrecords)