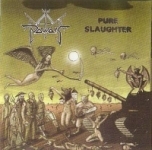 Hell yeah, this is one of the finest examples of "real" Death Metal that has been released lately! Though the band’s name might arouse politically incorrect connotations, AXIS POWERS do not represent any fascist or right-wing ideology, but like BOLT THROWER lyrically predominately deal with war in all its destructive details. Musically "Pure Slaughter" is absolutely everything Swedish old school Death Metal addicts long for, a guitar that buzzes 100% like Sunlight-sound did in the 90s, songs that resemble NIHILIST / ENTOMBED, DISMEMBER, CREMATORY or GOD MACABRE, straight and catchy structured material, that’s brutal, driving and nicely raw! A couple of songs contain some cool melodic leads (e.g. ‘I Am Anyone’, ‘Ashes’), but mostly AXIS POWERS concentrate on turning everything to shreds with their well-balanced mix of massive groove and up-tempo aggression. AXIS POWERS is not the re-invention of a genre but ancient Death worship with style plus comes along with a fucking cool ABSCESS cover (‘Suicide Fuck’). This is Death Metal! www.ironfistrec.cjb.net