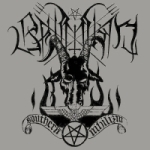 Texas is a place of stark contrasts. On the surface is the oil pumping conservative cowboy veneer the world is used to, but on the flip side lurks a dark, pulsating network of blasphemous veins. The lone star state has given us much over the years, NECROVORE and S.A. SLAYER come to mind. BAHIMIRON are the next in line, having produced only one other full length album several years ago. Their latest, "Southern Nihilizm" is like many other American Black Metal recordings, possessing a typically harsh wasp-like sound, and borrowing heavily from its European counter-parts. In many ways the album sounds like a sped up latter day MUTIILATION with a dose of KATHARSIS and FLUISTERWOUD. There is a noticeable change in production towards the halfway point, or rather the beginning of side B. Before any of this puts you off, keep in mind, that the bands BAHIMIRON sound like aren’t bad at all, and its rather nice to have something that satisfies all the criteria without adding anything new. The band is most definitely angry and with plenty of hate. There is depth here, albeit a depth you’ve no doubt explored dozens of times. This is good stuff. www.myspace.com/bahimiron