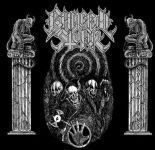 I am deeply distressed, considering that this gem was released 2017 in digital format and obviously no one took notice. But thankfully Invictus Productions decided to release this debut EP by the one-man-band BANEFUL STORM in CD and 12” vinyl format. A guy from France, calling himself Jolyon Dagon, is responsible for the four tracks plus spooky intro and outro. The music itself is not only a deep bow to the early days of MORBID ANGEL, the music is even on the same level. Like someone at Earache Records found some old songs from the “Altars Of Madness” recording sessions (I think it goes even more back in time, to “Abominations Of Desolation” with little bits and pieces of early NOCTURNUS thrown in here and there – Frank). In fact BANEFUL STORM used the same formula German based SIJJIN have been successfully practicing on their demo “Angel Of The Eastern Gate”. Adopting a style in its closest way without being a copycat or lame wannabe imitator. Serpentine riffs and swirling soloing meet up with most hard-hitting drums and brutal, aggressive vocals. The track ‘Blasphemy’ (not a cover tune of the MORBID ANGEL song of the same name) even incorporates a keyboard (hence my NOCTURNUS reference – Frank), which fits perfectly. Regarding the songwriting, it is short and down to the point, combining technical skills and the snakelike guitar work to a remarkable compactness. In fact there is no idle running, every note is at its place. Luckily the sound is far away from being sterile, a drama if the production would have ruined the great songs. Usually I do not use any advertising texts, but this one by Invictus Productions is simply to good to be kept back. “Step forward into the chapel of ghouls, bow before the lord of all fevers and plagues, and witness NEW visions from the darkside with BANEFUL STORM‘s Invocations!” I could not have put it better. This mini-album is, since half of the year has passed, a hot candidate for this year’s candidate in the category old school Death Metal. Further information can be found here www.facebook.com/banefulstorm or www.invictusproductions.net. And by the way, as playlists are always some kind of bulletin board of what is worth listening, if you take a look at the playlist section of this side, you will notice “Invocations” made its way up to the leading position of the chief editor. At least this fact should make you immediately visit the band’s bandcamp site here https://banefulstorm.bandcamp.com