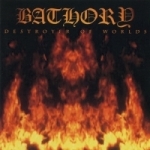 Please imagine the following: you’re a big BATHORY fan – I know it’s hard, just use all of your imagination ; -) and it’s about the end of the month and you’re almost broke, but after years of waiting you finally spot the new album in your favourite record store, so of course you spend your last money on the vinyl (by the way, thanks to Hajo for telling me the CD’s playing time, my record player refused to do so). Back at home I put on “Destroyer…” immediately and was rewarded with the sound I wanted to hear: an epic intro and all that viking grandness connected with BATHORY! Great title song! But then desaster hit me without a warning a little later: BATHORY trying to sound “extreme!” Call me ignorant but there are hundreds of excellent bands playing more extreme than BATHORY! Hey, 20 years ago this would have been considered “extreme”! A propos: Quorthon is the only singer I can think of whose vocals are better on slow, melodic tracks although he simply can’t sing! Being unable to control his voice makes the “extreme” songs even more cheesy! There has to be a certain power in one’s lungs for this! Why don’t they concentrate on what makes them unique, the epic stuff? All of those records still belong to my all time favourites! On “Destroyer…” there are more epic songs (all of them real good) interrupted by more “extreme” tracks. So Quorthon is obviously trying to satisfy all of his fans and although this is quite a long album with space for both, I think it’s a foul compromise and I’ll put on the new TWIN OBSCENITY now.