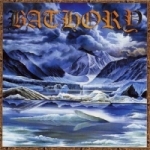 I admit I was hoping for a BATHORY album like this one. Quorthon comes up with an hour of Viking sagas and mythology and consequently sees me down on my knees hailing the goat. Of course somebody has to complain that the Swede sold out as the epic side of BATHORY seems to sell best. But why should we care? Hey, I am one of those guys who prefer buying those epic BATHORY albums. And what do we need innovation for if the old ways still have so much to offer? Leave that for the young bands, there are some indeed! But there is even something that makes “Nordland I” differ from “Hammerheart” or “Twilight Of The Gods”: the songs are bombastic for sure but they seem to enter the mind rather through the back door which somehow gives them more depth. Furthermore, the strong but dirty production (listen to the bass on ‘Vinterblot’) somehow doesn’t let the album fall prey to cheap pathos. A fast banger called ‘Broken Sword’ with a beautiful acoustic in- and outro and the up tempo double bass groover ‘Great Hall Awaits A Fallen Brother’ approximately in the middle of the CD finally make clear that any complaint like “monotonous” or “boring” tells more about the listener than about the record and as we all know that Quorthon is not Bruce Dickinson but knows how to use his voice, I can’t find anything wrong at all with “Nordland I”. If you’re into epic BATHORY, check it out. Personally, I can’t wait for “Nordland II” being released in early 2003.