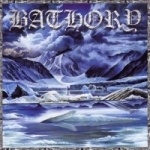 I can’t really understand why there’s been so much criticism concerning “Nordland I” in the German press. I mean, of course is Quorthon not going to come up with something completely new or innovative anymore… You hardly find bands that are around as long as BATHORY are and who dare to experiment without failing in it completely. So, why should he? Throughout the years he invented a unique style on his own that influenced a whole generation of younger bands and nowadays he prefers to stick to it, which is perfectly fine with me. Musical extravaganca he consequently saves for his solo albums as that type of writing simply doesn’t go hand in hand with the much appreciated BATHORY style. And as Quorthon already proved that he ain’t cabable of coming up with any convincing stuff in the raw, early (Black Metal) style of the band anymore (just remember how horrible he failed with “Requiem” or “Octagon” years ago), I consider it a very clever decision to return to the epic side of BATHORY by writing some more battle hymns in the “Hammerheart” or “Twilight Of The Gods” vein. As expected “Nordland II” exactly follows the musical lines of its predecessor and, even though it doesn’t exactly match its qualities, comes up with another bunch of very cool, heroic Viking themes for eternity. In direct comparison “Nordland II” may have turned out a little bit more raw sounding, with a partly even thrashier approach, yet the whole record is epic as hell! Whenever I listen to any of these type of BATHORY tunes, I immediately associate the music and their very strong melody lines and rhythms with movies like “Conan, the Barbarian” or a horde of drunk, conquering Vikings. Quorthon may still be a rather poor vocalist, but his voice nevertheless delivers a certain raw charme, that fits the compositions pretty good. And his talent for composing is still very much present – even today – while the ridiculous guys from MANOWAR lost that very early on in their career already (they actually only gave me a similar thrilling feel up till “Into Glory Ride” only!). So, as long as BATHORY albums come up with this quality level, Quorthon may continue on for many more years.