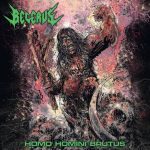 How do you stand in a bloody boiling sea of countless brutal Death Metal bands? Enter the Becer – a primordial cretin and brutal monster who doesn’t use such wimpy intellectual shit as language. According to the band: “His only aim is smash stuff and grunt all day long.” So BECERUS goes for grunts, growls and evil screams using them effectively as an instrument which adds to supreme raging brutality of the music. If you heard BALATONIZER, you’ll get a drift, as the growler supremo Mario Musumeci used to shred his throat in that band. Also Giorgio Trombino (guitars and bass) plays in ASSUMPTION, MORBO, HAEMOPHAGUS, so the guys are experienced at their craft. On planet earth BECERUS calls Palermo, Sicily its home, “Homo Homini Brutus” is their debut album and right off the bat it proceeds to kill, maim, cut and smash the shit out of the speakers and your brains in a truly old school way as patented in USA back in 90s – CANNIBAL CORPSE, BRUTALITY, DEICIDE, MONSTROSITY, BROKEN HOPE, BAPHOMET, etc. All these influences are grinded through the blender reeking of BIRDFLESH, EXHUMED and such, so in the end you get uncannily brutal, gory Death / Grind mashup! The performance is top notch – fucking tight and precise – although it often keeps changing from ultra heavy Death Metal to insanely fast Grindcore, the compositions come across very well thought out, so they never ever get repetitive. Without being constrained by words Mario can deliver and play around with some mind bending syllabification which sets BECERUS from many others. The whole presentation and image fits the music as the bloody glove and only lasts 24 minutes which will leave you totally pummeled, picking your jaws from the ground. Brutal Death / Grind on amphetamines, highly recommended stuff! Band info: www.facebook.com/becerus. Label: www.facebook.com/everlastingspew