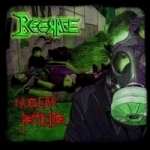 Wow, the first thing that strikes me is the name… this "Thrash Metal revival" has become a joke in itself with most bands, and I was afraid that after looking at the cover art, the song titles and the very first riffs, that I was going to face just another copy-cat of the old heroes. And then, the title of the songs of this EP which also reminds of that of many, many Thrash / Speed Metal bands from the late 80s, which can hardly separate Thermonuclear power from a bottle of beer… ok, hangover can sometimes feel like a bomb dropped in your skull, but after a while the fun is over. Well, after a few spins, this turns out better than I expected. Yes, it is true they play rough Thrash Metal, although I can hear more than once some melodic Death Metal touches. Especially some riffs sounded to me like AT THE GATES if in a slower tempo. No, not Metalcore, instead it is more likely to be described as Thrashcore, with references to Crossover bands like D.R.I., some CORROSION OF CONFORMITY, with touches akin to early METALLICA and early SLAYER. The vocalist is not exactly shouting nor really singing, but it comes across as doing a pretty decent job. The production is quite heavy, with loud up-front guitars, if probably the only thing that sounds under produced is the drums as this tends to actually take away power from this recording. After a few more listenings I could almost swear this was an American Thrash band from around the LA area in 1988. It also sounds more honest than what I though it was going to be, like a bunch of kids that found out Heavy Metal and some Punk / Hardcore and are now trying to do a Thrash band. There are many catchy riffs and choruses here, and the solos are also good. Passing the really comic band name, the really generic "fun-Thrash" cover art and design, here lies within a very competent Thrash Metal band, which besides my recommendation to change the name, just needs to fine tune a few details, improve the drum sound, and convince us all that they are not a Thrash Metal revival band. I can almost feel that the band members really live this music style and are not just jumping in a trend wagon. A lot better than bands like MUNICIPAL WASTE or EVILE and taking some sounds akin to ATROPHY and even some sound to later KREATOR, this might call for an interesting future. www.myspace.com/beerage