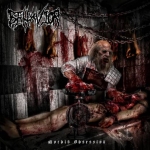 This is the impressive second album by these Brazilian Deathsters, six years after their debut. Beginning with a suitably apocalyptic intro, the album proceeds to the pragmatically titled ‘Death Metal Force’. There is something, mainly about the voice, the accent perhaps, that sets the mind into the savagery of Brazilian Metal. Still, the production is quite modern, although with a heavy resonation that I guess adds to a feeling of being surrounded by a horror movie. The songs are mostly mid-tempo Death Metal, very intense and displaying tight musicianship. It all sounds very macabre, but there are quite a few moments of real melody, such as the whole of the solo in the title-track. These melodic elements do not in any way hinder the deeply old school feeling of this album, that indeed profits from the instruments’ precision and the sick vocals. The lyrical themes are also what would be expected, dealing with death, gore and horror, as befits the morbid obsession that names the album… hear the cool spoken intro to ‘Devourer Of Purity’, for example, a track with sweet guitar leads amidst all the brutality. ‘Asphyxiated’ goes on with the impressive solo guitar work that is very much worth enjoying. By the time the album ends, any Death Metal maniac will find his time was well spent! A very good album that is definitely recommended for fans of NECROPHAGIA, AUTOPSY or IMPETIGO. This was released by the band itself, so get in touch with them via www.facebook.com/behaviorofficial