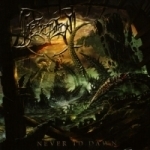 I got sucked into the universe of the Maltese steaming freight train BEHEADED back in 2000 when they released their mini-CD "Resurgence Of Oblivion" on the Danish label Mighty Music. A crushing EP of 5 tracks of brutal and technical Death Metal, not leaving any prisoners behind. The band released their sophomore and great full length "Recounts Of Disembodiment" a couple of years after. After that release I lost track of the band, until a week ago when this new album ended up in my hands. BEHEADED did release an album in 2005 titled "Omnious Bloodline" though I haven’t heard that one, and here 7 years later they strike back. We are still getting a slap of brutal and technical Death Metal that doesn’t leave much left to be wished upon. When comparing to earlier releases it is tremendous how much the band has developed when speaking of songwriting. The music is flowing and ever changing, always brutal and technical, without it going over the top or breaking the flow. Another thing that stands out once in the a while, is the band’s ability to incorporate dark atmospheres, as in the overly brutal and dark closer ‘The Ancient Acumen’, more of that would have done good. Though this is still 45 minutes of headbashing of the good kind. The album offers a good mix of straight to the point technical brutality and darker atmospheric pieces, all delivered good and capable. Though in retrospective, I’ve heard all this before, both worse and a tad better, but still, releases as these might vanish into oblivion a bit too fast. That said it is a well done and delivered Death Metal album that will satisfy most into the genre, and a strong comeback album from the Maltese madmen. It’s gonna be good to hear what it’ll develop into this time around. More info at: www.facebook.com/beheadedmt, www.uniqueleader.com