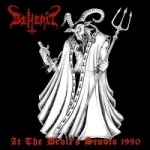 When a band releases something from their archives that never saw the light of day until years after its creation, it’s almost like seeing them for the first time or perhaps a side of them for the first time. While this forgotten BEHERIT session sounds more like “The Oath Of Black Blood” than anything else, in essence it preserves a BEHERIT in transition. A cocooning stage including “The Oath Of Black Blood” and what eventually resulted in “Drawing Down The Moon,” frequently cited as their finest hour. Most of the tracks featured on this album exist in different form on very early demos and EPs dating from 1990 to 1992; releases like 1990’s “Demonomancy” demo. But there are some, like ‘At The Devil’s Churns’ and ‘Whores Of Belial’, which I doubt more than a handful of people had ever heard before, much less heard a properly mastered version. These songs, to my knowledge, exist nowhere else except on this release. Listen to ‘At The Devil’s Churns’ and it should become clear that during the time captured on this album, BEHERIT were slowly developing that obscure, nuclear fire sound that made “Drawing Down The Moon” an eternal classic. And yet the ugliness of “The Oath…” saturates each song. On an early version of ‘Nocturnal Evil’ the rough, grave soil sound of “The Oath…” is bathed in the nuclear feeling of “Drawing” – sort of like looking at something through a differently colored lens, or watching a satanic grave ritual bathed in the red glow of a bomb going off on Mars. My personal favorite, ‘Whores Of Belial’ recalls not just “The Oath…” days but the time when BEHERIT released a demo under the name THE LORD DIABOLOS. Savage and punishing, the riffs and drumming devour the listener, but it’s the solo which truly makes this song in my eyes. Not complicated, but soulful, atmospheric in a way bands who had much more money to spare were unable to achieve. However if any song on this album brings back THE LORD DIABOLOS, that song is ‘Six Days With Sadistic Slayer’, a song that absolutely always crushes in whatever version it exists. The term “bestial” suffers from overuse, but I’m at a loss for many other words to describe BEHERIT’s particular brand of ferocity. It has rawness, but even more than that, there’s something in the music which seems inherently evil and negative. Having recently watched The Exorcist, I’m doomed to draw a comparison to Pazuzu, the evil pagan demon from ancient Iran that possesses Regan. There’s a scene early in the movie, where one of the two priests stands man to beast with a statue of Pazuzu. The surrounding desert, full of ugly wild dogs, and the swirling wind seem to give the horrible statue an eerie life, and the wild animals go mad, snapping their jaws at each other. The priest seems overwhelmed and it suggests the demon has won the first round. This album is the Black Metal soundtrack to that scene. BEHERIT would one day lose the bare-fanged rawness like Pazuzu loses his power over Regan, but there the comparison ends. BEHERIT went on to great things with “Drawing Down The Moon”. I don’t think anyone regrets that album exists! But still, it’s gratifying to get a fresh taste of an old flavor. It’s good to hear BEHERIT like this again, even if we’re a little late to the show. www.beherit.fi, www.kvlt.fi