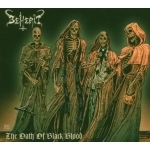 BEHERIT
The Oath Of The Black Blood
(Spikefarm Records)
25:49min

I never thought that this would be on a list of re-releases for some label one day. Not that I would say there’s no point, since the album has surely been bootlegged already who-knows-how-many-times before. The very album I’m talking about here is BEHERIT’s legendary debut album “The Oath Of The Black Blood” that the famous rip-off label Turbo Music from Germany released in the unholy year of 1991 Anno Bastardi and which Finland’s Spikefarm Records has just recently re-released as a limited digipak edition due to some mysterious reason of which I haven’t got a slightest clue at all. I remember when the album saw the light of pale moon for the first time back in the day via Turbo Music. The album was a real oddball in the Metal scene, having 10 songs of the ugliest, noisiest most primitive and rawest Black Metal shit I had ever heard until that day. It felt like something wasn’t “right” on that record and totally out of balance back in those days when playing Death Metal was a big fashion thing amongst the Metal-loving kids and everything else was basically for wussies and wimps. At the same time, and due to all these reasons, BEHERIT’s “The Oath Of The Black Blood” sounded somewhat appealing and addictive to me, representing something totally different. Oddly, they reminded me of the Canadian grave desecrators BLASPHEMY quite a bit due to the similar hateful and malicious outbursts BEHERIT had managed to capture for “The Oath Of The Black Blood”. However, even if “The Oath Of The Black Blood”‘s musical values and qualifications can be considered somewhat minimal, its meaning and influence for the Black Metal scene for the further years has probably been more meaningful and stronger than many of us can ever truly figure out. BEHERIT started it all, at least here in Finland. They were definitely the uncrowned leaders of the whole Black Metal genre and basically the main influence for many up-coming Black Metal bands that were spawned into the Black Metal community within the nineties. That distinction nobody can take away from them… ever. If you have had problems getting your hands on this, then your burden has drastically been relieved now when this almost luxurious digipak of “The Oath Of The Black Blood” has been unleashed through Spikefarm with all the original BEHERIT artwork from the band’s early years and such. Wanna get polite, but useful advice? Alright then… get this very essential jewel of Finnish Black Metal history before it’s too late for that, once again. Website: www.beherit.tk.