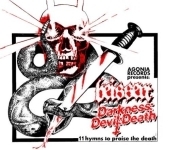 German Metal act BEISSERT managed to drop my jaw open; if not completely wide open then wide open anyway by sheer amazement what an exciting musical formula they have found for their 3rd album "Darkness: Devil: Death" already. They obviously haven’t taken things for granted on their latest opus when it comes to combining some different sub-genres of heavier sides of music, into one bigger musical captivating and tantalizing puzzle. Without riding on the wings of some specific Metal sub-genres, for some strange reason such band names as SATAN’S HOST (the band’s later era with Harry "Tyrant" Conklin on vocals), MACHINE HEAD, POWERWOLF, CROWBAR and some unnamed modern Metal acts popped up in my mind while listening to this release. Having this diverse sound as BEISSERT do on this record – and managing to make it all sound interesting yet quite a thrilling experience even, can be considered quite an achievement in itself, I think. BEISSERT have marched into a war without any prejudices on their shoulders, made a full album of somewhat innovative and genre-free Metal that borrows a thing from here – and another thing from there. The execution of their songs is on top-notch level, in which every single detail matters. The weirdest song on this record must be ‘Perm Trias’, which sounds almost like the guys would be jamming without any real purpose or goal, that is also ended with a couple of hand claps and words ‘I hate the world…’. Sic! I have to say I did enjoy this album very much myself, offering more than just your daily dose of ‘meat & potatoes’ so to speak. Also, with the amount of thrashy riffs the album contains, it makes this record even more delicious for me to digest to. Great stuff. More about BEISSERT’s death worship can be checked at www.deathworship.com, label: www.agoniarecords.com