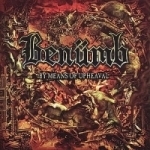 I am not too familiar (to say the least!) with Hardcore and Grind music, so you can imagine I felt uneasy to review this one as it is a mixture of these two genres. If I tell you that 22 tracks are featured on this release and considering the total running time, I suppose you get a fair idea of what is going on throughout the album. All the tracks are hyper brutal affairs, dominated by the frantic and angry vocals delivered by Pete Ponitkoff, whose technique is certainly an acquired taste; in fact, even if the album is short, you can experiment tiredness trying to listen to it entirely in one session straight (like I did). All the songs are tailored on the same frame, and I personally faced difficulties to distinguish one track from one another, especially considering the almost total lack of blank spaces necessary to take a breath. But that put aside, I can say that this Californian quintet escapes mediocrity thanks first to an excellent production (how fortunate, because otherwise the album could have been a major flaw!), lyrical approach, a good "musical" execution and intelligent rebellious lyrics in the vein of what TERRORIZER did on their "World Downfall" classic. Too bad that "By Means Of Upheaval" is more a wall of sound than a collection of well distinguishable songs, but I suppose it is de rigueur considering the musical genre these guys stand in. Besides, I can only think good about a band who spend two pages of their CD booklet spreading out addresses of fellow musicians, labels and zines; it tells a lot about their sincerity and integrity, a lesson some Black Metal "misanthropes" should be well aware to meditate. Musically not my cup of tea personally, but from what I heard here, I am sure BENÜMB could appeal to a large public, from Hardcore followers to a peripheral fringe of the devotees of the most extreme Death Metal. Me, I am a too old HR / HM warhorse to fully taste this.