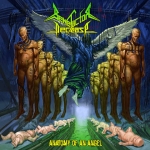 What we have here is some brutal Thrash from the land of Hellas, Greece. Thrash bands are a dime a dozen and it’s uncommon to encounter a young Thrash band that can grab your attention but this one does. For one thing, bass solos! The bassist is so damn talented the band had him solo on the song ‘Electrical Death’. This band has a lot going for them. The musicianship is great and the vocals powerful as hell. It sounds like fast, brutal speech as much as singing. I find that the vocals is the element I focus on the most as a listener. The cover art is sick too: an angel robed in black, laced with many black spikes, standing between rows of adult and baby cadavers that stretch back to infinity. Whatever message lies there, it should grab your attention if only for a while. When you listen to this album you don’t want to skip around a lot like with a lot of other Thrash releases. The riffs are not totally blatant rip offs of older and better bands, but are interesting to hear and blistering fast. Unfortunately, a couple songs like ‘Chronicles Of A Paraphiliak’ and ‘Abandonment To The Hangar’ clock in at 7 and 9 minutes long respectively. I don’t know many bands in any style of Metal that can pull off such long opuses successfully. People even come down on IRON MAIDEN for that from time to time! But, that’s a minor complaint when the album is chock full of catchy, fast, riffs and a great vocalist’s pipes. A couple of songs feature blast beats and some tempo changes that show they aren’t constantly going mach 10 and it’s a nice, brief, change of pace that’s cool to listen to like on ‘Feel The Razor’s Touch’. They even go acoustic to open ‘Lyssa’. However even without these admittedly refreshing diverse elements, this would still be a good Thrash album. I guess it’s because this band sounds like they believe in what they are doing and are excited to be here playing Metal that I enjoyed listening to this so much. If you have time to check these guys out, do it. www.facebook.com/benefactor-decease-121278161219300, www.xtreemmusic.com