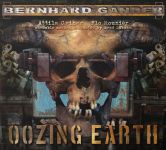 Firstly, I had no idea what this was about, secondly the only reason I picked this up from my editor was the combination of Attila Csihar and Flo Mounier, both of whom I absolutely respect for what they’ve put out artistically. I sat down to research what this entire thing was about and I realized this was essentially an exercise in marriage of extreme Metal with a modern ensemble. It took me a few listens to figure out the goal here, but I have to say, I don’t necessarily see the convergence of both the artforms here. What I’ve noticed is a rather ungentle attempt of understanding and interpretation of extreme Metal using an approach of traditional ensemble. I also looked around the work of Ensemble Moderne to understand what it is they actually do, and they seem to be quite an effective musical bunch on their own, however “Oozing Earth” primarily seems to depict a picture of post modern ruin that BERNARD GANDER wanted to express. Track # 3, ‘Wall Of Waters’ is your traditional Industrial track which gives in some sense of direction to the average Metal fan. However, I strongly believe “Oozing Earth” is a perfect soundtrack to something like Mad Max or maybe a stage play which depicts the fall of society as we know it. Now, this is the important part, the music here reflects the fall and not necessarily what is beyond. For example, track # 5 ‘Industrial Incet’ an instrumental works quite well. One would ask, how do the wind instruments here even make sense? But they kind of express the process of the decline as we are experiencing now. I can sometimes see the thought behind the writing, but more often than not, I find myself disagreeing. I also entertained the idea of “Is my inability to see Heavy Metal beyond, limiting my understanding of this work?” As much as I want to say no, I know there’s an element of bias that rubs off on this review. My critical view of Heavy Metal hinges on the rich history that the genre offered and I also not just acknowledge, but also enjoy some of the avant-garde offshoots of Heavy Metal. However, I wouldn’t let my view cloud my overall appreciation of what we have at hand here. I’d guess this is a curiosity for a lot of Metal fans as to what’s exactly going on? It was for me as well. I think this entire musical experience is better enjoyed as a soundtrack to a film where it would have better impact. On its own, I don’t think it is able to convey the message as intended. Or maybe some elements could be re-written to convey the emotion a little better. Well, that’s just my view and perhaps it isn’t what the composer intended to communicate. In that case, that’s also fine. For more information, please visit www.facebook.com/supremechaos.de