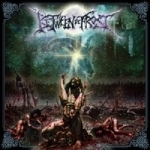 BETWEEN THE FROST
Realms Of Desolation
(Grotesque Productions)
44:53min

I was highly surprised to find out about the comeback of this band from Tarragona, after their absence on the Spanish scene for nine years after the release of their first album, "Instinct Of Surliness", even if they released a demo in 2003 and a promo in 2005, and I had been hearing some news about their return. It’s quite clear they had bad luck with their first release as, even without being a bad album, the label that released it (Abstract Emotions) disappeared shortly after that, and at the time they put it out Black Metal bands didn’t have many chances in Spain. But Grotesque Productions from Sevilla supports them releasing this new recording, which appeared in 2007, but was recorded between 2003 and 2004, and mastered in 2005 by none but Andy LaRocque (KING DIAMOND, DEATH…). That mastering can be felt without any doubt on the melodic aspect of the recording, which maybe already was, but he strengthened it. But, focusing on the new album of BETWEEN THE FROST, I don’t think anybody would be surprised by their sound, they still are a beginning of the 90s Swedish Black Metal oriented band, with some preferences for DISSECTION and the first DARK FUNERAL. Even though they can surprise on other aspects. The best part of the album is its variety, as I’ve never been a big fan of the Swedish school of Black Metal of those times (with the exception of DISSECTION and some other less typical band) because of the monotony of its sound. In the case of the first album of these guys the same happened. They played fine, they didn’t lack of agressiveness and they had good melodies, but it was hard for me to listen to the whole album. This doesn’t happen on "Realms Of Desolation", a more mature album, with more variety and lots of details, even if the guiding line is high speed and melody. They even dare to add some more melody than in the past, not only in the fast parts but with leads and more relaxed parts, which gives some Heavy Metal touches to the album, but not in a cheesy way, there’s enough rage. Even though, I feel they still have a hard relation with their influences, as well the ones I mentioned before as other Swedish ones (I could think about NAGLFAR or even EUCHARIST), and it would be great that they search a bit more for their own personality. I don’t want to give the impression that’s an easy thing nor the music is bad, because they’re not just one more clone (and there are lots). They achieved something with this recording and it’s four years old, so I’m sure they have had time to evolve. Going back to the production, it’s good, really good, with a perfect equilibrium between all the parts and enough strength, but I would have liked a heavier sound, not so based on melodies, which would have given them a more brutal approach. A higher volume on the drums wouldn’t have been bad too, as the snare and the cymbals are hard to recognize. A good artwork, plus almost forty five minutes of pure Swedish melodic Black Metal, make this CD a good option for the ones who like this style. www.betweenthefrost.com, www.grotesquemusic.com