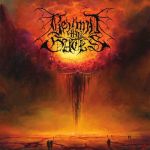 BEYOND THE GATES
Beyond The Gates
(Evil Spell Records / Diabolic Might Records)
38:16min

When you think of Norwegian Black Metal, you usually think of MAYHEM, EMPEROR, BURZUM, DARKTHRONE or IMMORTAL. But really, there’s just so much more. And when you consider it, there’s not really a “Norwegian” sound to the early bands. Just look at the bands above. None of them sound alike, yet all sparked multitudes of copycat bands the past few decades. But out of the snowy forests comes a breath of fresh air that, though doesn’t necessarily sound completely unique, still tend to capture a feeling unlike the bands who originally inspired the genre. First intro track ‘Beyond The Last Gate’ segues into ‘Great & Old’, a pounding, rapid, energetic blitzkrieg of a song with simple yet effective guitars, throaty vocals and drums that demolish and raze. ‘Forced By Black Magic Rites’ is similar in its delivery as the track before, as ‘A Blade Through Your Heart’ chugs, smoulders and churns. The fifth track ‘Dead & Rotten’ is sort of a hot mess, but in a good way. Germany’s BEYOND THE GATES isn’t necessarily the tightest band around, but that’s sort of their charm. There’s ruggedness and rigidity to their sound which is appreciated. ‘Embrace The Night’ at one point sounds like the drummer completely forgot what in the living fuck he was supposed to be doing. But again, that’s quite alright. It adds to the imperfect production which gives it a more ‘live’ sound. ‘Outpost 31’ is a ganache of raspy vocals, steady drumming and sort of mid-tempo guitars that throttle and gallop. ‘Crossing The River Styx’ continues more of the same style. Then there’s a cover of BATHORY’s ‘The Reaper’ which is furious in its delivery as it damn well should be. ‘Eternal Fire’ ends the album in a much slowed down song that changes things up a bit. For the most part, BEYOND THE GATES won’t bring any uniqueness into the mix. The whole album is pretty straightforward in its songwriting and musicianship. But this isn’t a bad thing. Sometimes we all need something to just crank up and enjoy without too much focus on anything else. A vinyl edition will be released early next year through Diabolic Might Records. For more info, check out www.facebook.com/rlyeh666, www.facebook.com/underevilspell, www.facebook.com/diabolic-might-records-666-181543565542566