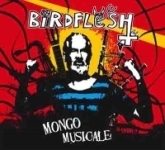 My god. The last time I heard anything from the chicken coop of these Swedish retards was in 1995! I reviewed their brand new demo at the time simply stated “Demo Of Hell”. A blue-lipped orphan of the underground if ever there was one! Here’s the review as it was written for my Metal fanzine ILBASHA Issue #4. Review: BIRDFLESH – “Demo Of Hell 1995” – 5 songs – Sure you’ve heard the phrase “never judge a book by its cover”, let me tell you no time ever has this phrase been more aptly said. Looking more like ravaged adolescents from Oderus’s night slumming the cerebral palsy ward. You’d never guess this was one of the more energetic Metal acts to emerge from Sweden since the NIHILIST days. Five tracks of so much crunch and obvious power they’ll get you screaming for more in no time flat!!! Sound quality is just as relentless, you simply couldn’t ask for more from an engineer to do for a band’s release. I applaud thee! Lyrics, inlay and cover art are beyond bizarre but tastefully morbid. So close your eyes and enjoy the ride, this is for sure a demo of hell! Ahhagggghhhhhhhhhhh!!! So now you can imagine my surprise when I heard not only do they still exist twelve years later, but that “Mongo Musicale” is their fucking third full length album! Unbelievable! I didn’t know whether to laugh outright or sit back in stunned amazement at the fact that these goofy shits have still been at it all this time right under my very nose?! Not to be confused with PUNGENT STENCH or their CD “Club Mondo Bizarre” or IMPALED and their CD “Mondo Medicale”. BIRDFLESH’s similar titled opus “Mondo Musicale” just might catch the unsuspecting Metal fiend off guard whilst flipping through the used Metal section of his local retail music shop, so buyer beware! BIRDFLESH are sneaky like that! Featuring 25 spazztic Grind abominations such as ‘Mongoloid Wannabe’, ‘Handicapitation’, ‘Dancefloor Dismemberment’ and so many more it’s a wonder they have any breath left in ’em at the end of this record! Granted your money may be better spent somewhere else on a more topical friendly, heavy politico or eco-serious Grind unit. However, if you can just get past all the visual absurdity, past all that is the oddity called BIRDFLESH. I still say after all these years, that you would be extremely hard pressed to find a more entertaining Grind act around! The vinyl version of “Mongo Musicale” will also be released with yet another guaranteed bonus track, and up for sale early May 2007 on Germany’s Power It Up Records – www.power-it-up.de. Also for those interested or who missed out originally, T-shirts left over from last Winter’s U.K. tour in support of this soon to be released “Mongo Musicale” album are still available from the band. From Dental Records. Home to such “almost” household names as: INSISION and HEARSE (featuring ex – FURBOWL / ex – ARCH ENEMY vocalist Johan Liiva). Contact: Andreas Mitroulis, Par Lagerkvists v. 1c, 35243 Vaxjo, Sweden or carnivalgrind@birdflesh.net or check out www.birdflesh.net or www.myspace.com/birdfleshgrind or the label at www.dentalrecords.se.