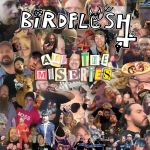 So, if you don’t know BIRDFLESH, where the hell have you been sleeping all these past 30 years? The band has been going since 1992, released a bunch of albums and a shitload of splits, played hundreds of shows (which are amazing, intense and hilarious, seen them twice and they always kicked my ass) and in this year of 2021 comes with yet another EP “All The Miseries”. To put it up shortly (just like their songs), they play intense thrashing Grindcore with funny songtitles and even funnier lyrics. Short, precise and to the point, like MUNICIPAL WASTE had a bastard child with WEHRMACHT or something. Well, you get the idea and besides I think most of the readers already should’ve heard this band. “All The Miseries” packs all the punch, humour and grinding blastbeats with thrashing riffs in 13 new tracks with such goofy songtitles like ‘Kickstart My Ass’, ‘People Of The Leprosy’, ‘Pissboy’, ‘Sayonara Sensei’ and more, clocking in aboout 14 minutes, while the rest 13 minutes are filled up with live tracks which sound like they’ve been recorded with a cheap mobile phone, meaning – crappy. I really dug their previous full length “Extreme Graveyard Tornado” that came out in 2019 and this EP sounds up to par (and a little sharper) to it, so can’t complain about anything, it’s one of the few modern sounding Grindcore bands I really enjoy, also their t-shirts are the best, so there’s nothing else to add, it turned out much longer than I thought it would anyway, go grab that little sleazy fucker! Band info: www.facebook.com/birdfleshgrind, label and album: www.facebook.com/everlastingspew