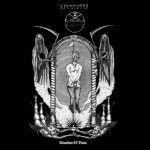 Russia’s BLACK GOAT, since 1999, have released shitloads upon shitloads of demos, EPs, splits, compilations and full-lengths. Although there was a nine-year gap between 99’s “Black Goat” demo and 08’s “DCLXVI” demo, the band haven’t missed a year since. And we, as Metal fans, definitely appreciate that. IX (guitars, bass, vocals) and Daniel Holocaust (drums) are busy motherfuckers. Hell, the drummer’s been in close to a million bands himself. So how do they have the time to continue writing and recording new songs on a speedy basis? Well, I think I know. The tracks that make up “Ritualism Of Doom” sound like songs recorded by a band unrehearsed. And I don’t mean a raw, chaotic, primitive style of recording that appeals to the hardcore Metalheads. I mean a band that writes a song and immediately says “Hey, press record!”. Maybe I’m a little harsh. But you’d think a band with four million releases would be a little tighter in their sound. Fuck, maybe that’s part of the appeal to their fans. Who the hell knows. After track one’s long-ass intro of sound and voices, ‘Vrykolakas’ kicks in with cheap-sounding keyboards and a monster-mash of guitars bleeding into vocals that sound like an old man burping. The drums and guitars don’t seem to get along very well. ‘Malleus Maleficarum’ is more Thrash than Black Metal. But at this point, I’m not sure I care. It has more of a biker-bar sound than a song recorded at the gates of hell. ‘My Death / De Vermis Mysteriis’ has some ominous spoken bits until the echoey (is that a word?) vocals plunge into the mess of the mix. The MORTUARY DRAPE cover (‘Vengeance From Beyond’) actually isn’t half bad (the HELLHAMMER cover ‘Aggressor’ at the end of the EP also sounds pretty cool to me – Frank). Overall, if you’re a BLACK GOAT fan, then maybe give this a listen. Otherwise, it’s hit and miss, more miss than hit I would say. For more information, check out www.facebook.com/bgserpentmessiah, www.facebook.com/ibdc666