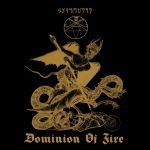 Although the moniker BLACK GOAT sounds rather clumsy and uninspired, the music itself is the complete opposite. The band is active since 1999 and the discography shows a huge amount of demos, split releases and compilations. And while it took 17 years to release the debut full-length “The Ultimate Revelation” in 2016, only four years later album number four is spawned. At large the trio from Russia is playing Black Metal, but there are so many influences and elements intermingled that is impossible to pinpoint a certain sub-genre. While the opener ‘Dreams After Death / Nekromaniak’ is a blackened Thrash Metal attack, the follow-up ‘Venefica’ sounds more like a classic Heavy Metal tune with deep growled Black Metal vocals. Accordingly the interspersed swirling keyboards create an occult atmosphere. Same goes for the next songs. ‘Uttuku’ and ‘The Darkest Mysteries’ are escaping any categorization and remind me of acts like MORTUARY DRAPE, early SAMAEL or early NECROMANTIA. The following songs are done the same way. Worth mentioning is the sound, because it is far away from nowadays standards. But after a few spins I must admit it fits pretty well. Elements like tremolo picking, shrieking or epic keyboards are almost completely missing, in fact this release is pure first wave Black Metal. A respectable and skillful journey back to the mid / late 1980s. Let’s do the time warp here www.facebook.com/bgserpentmessiah or here www.facebook.com/ibdc666.