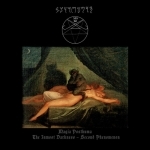 Oh yeah, here we have another one-man-project and it even comes from Russia. With premises like this, I would not have been surprised if BLACK GOAT turned out to be a pain in the ass. But I’m happy to tell you that I was wrong. Even though the band only consists of IX, this one is not some typical Black Metal project stuff of no relevance. Instead, we have stuff that has its roots in the early, more simple Black / Thrash Metal of the 1980s from the European or South American underground. And the discography of BLACK GOAT is absolutely fitting to these roots: no less than 18 (!) demos, some compilations and split releases, often only available on tape plus three albums within two years. Thus the latest full length "Magia Posthuma: The Inmost Darkness – Second Phenomenon" (that seems to be a part of a concept story) can be seen as a result of ten years in the underground. And for what it is, this album is really fine. After the intro piece ‘Ascension Of Golden Lilith’, the long double pack ‘Black Goat / Omen Perditionis’ is pretty strange, since most of the nearly eleven minutes are a ritualistic sounding quiet interlude. After another interlude the album gets really interesting with ‘Reap The Harvest’ that has the charm of very early BATHORY and the rough double of ‘Show Me The Wrath’ and ‘Serpentmessiah’. After another long interlude (‘Salvation & Forgiveness 18-11-1978’), the classic ‘Oh Fortuna’ from Carl Orff heralds the final ‘Ghoul Grave’, a quite diversified tune with some breaks and mid tempo parts. If "Magia Posthuma…" would have included one or two more songs like this instead of all the interludes (who are part of a concept, thus making sense), I might have judged this album as killer. But despite this little flaw, BLACK GOAT has released a very fine album for all those who still dig the oldest fashioned Black / Thrash Metal. Check out www.facebook.com/bgserpentmessiah or www.facebook.com/ibdc666 for more information.