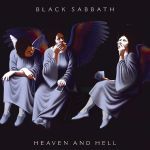 I guess I don’t need to tell anyone reading these pages about BLACK SABBATH, otherwise you are either completely wrong here or should go back to school to learn your lesson about the history of Heavy Metal. So let’s turn back time to the year 1979. Ozzy Osbourne had just been kicked out of BLACK SABBATH, starting a successful career as a solo artist and, later on, as reality soap star. A few months earlier, RAINBOW mastermind Ritchie Blackmore fired his singer Ronnie James Dio. And this already damn well known singer was hired by BLACK SABBATH as replacement for Osbourne. This collaboration only lasted for two albums, “Heaven And Hell” (1980) and “Mob Rules” (1981), that both are Metal history now, and was revived in the early 1990s for another album (“Dehumanizer” in 1992). The two albums from the early 1980s have just been re-released in deluxe editions that feature the original albums in freshly remastered versions and a second disc with extra material. So there is no excuse any more if those BLACK SABBATH masterpieces are missing in your collection. As far as “Heaven And Hell” is concerned, I just mention three songs here: ‘Neon Knights’, ‘Children Of The Sea’ and the title track. It’s still hard to find better classic Metal songs than these three. Especially the tremendous epic milestone ‘Heaven And Hell’ helped to define Epic Doom Metal and was covered and quoted many times. With ‘Lady Evil’ we have a song that foreshadowed the solo works of DIO. The four songs of the B-Side of the album are damn great as well, ‘Die Young’ and ‘Lonely Is The Word’ are a little overlooked, yet still fantastic gems. In other words: listen to “Heaven And Hell” if you haven’t done so yet and learn more about music history. Or listen to the album again and commemorate a genre defining, ageless masterpiece of Heavy Metal. And now it’s time to take a look at the bonus disc of “Heaven And Hell”. It features three songs that were only used for the singles that accompanied the album and two excerpts of four songs each from live shows of that era. The single B-Sides are live versions of ‘Children Of The Sea’ (from the ‘Neon Knights’ 7”) and ‘Heaven And Hell’ (from the ‘Die Young’ 7”) plus an edited mono version of ‘Lady Evil’ that was released as a 7″ A-Side. Not essential, but still nice to listen to, even though ‘Heaven And Hell’ is abridged. The up to now unreleased live recordings were taken from shows in Hartford, CT, USA in 1980 and the legendary Hammersmith Odeon in London at the turn of the years 1981 / 82. Both sound fine, especially if you take into consideration that they were recorded more than 40 years ago. But it is a real pity that both excerpts feature nearly the same songs: ‘Neon Knights’, ‘Children Of The Sea’ and ‘Heaven And Hell’ can be found twice. Only ‘Die Young’ (Hartford) and the intro ‘E5150’ (Hammersmith Odeon) are the difference. Of course it is nice to find that both versions of ‘Heaven And Hell’ are nearly completely different, as this song always featured long improvisations and interaction with the audience back in the days. Yet it would surely have been a lot better to feature a longer excerpt or even a complete recording from only one show here for more variety. But maybe that’s just counting beans. Otherwise this deluxe edition is really nice, especially as it sold for a fair price. Visit www.facebook.com/blacksabbath or www.bmg.com