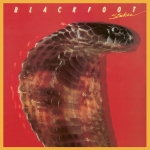 BLACKFOOT is a band name I’ve been familiar with for years. As a Rock fan since ’77 how could I not come across their numerous releases in record store bins over the past three decades, predominately the classic trio of “Strikes”, “Tomcattin’” and “Marauder”, all sporting similar cover photos of predatory animals. BLACKFOOT have always been tagged a Southern Rock band but despite the MOLLY HATCHET and LYNYRD SKYNYRD albums in my collection I suppose without any obvious radio or video airplay I never bothered to check them out. Getting the opportunity to review their third album, “Strikes” (the one featuring the snake cover, originally released in 1979), I immediately regretted not doing so sooner as the opening number, ‘Road Fever’, was far heavier and rocked way harder than I expected. Sure, BLACKFOOT have a Southern feel and that nuance is littered across the album in their dual guitar melodies and vocalist Ricky Medlocke’s occasional country twang, but BLACKFOOT unfairly lived in the shadows of the greats of the genre. There are elements certainly throughout the album that will bring references to bands like SKYNYRD, HATCHET or the ALLMAN BROS., but BLACKFOOT are more than that. On “Strikes” BLACKFOOT, who are actually all from Native American ancestry, rock hard (in a late ‘70s way) mixed with some examples of AOR appeal on heartfelt tunes like ‘Run And Hide’ or by adding a bluesy vibe on ‘Pay My Dues’. These guys perform a number of damn good songs that I found myself appreciating so much more on 2nd and 3rd listens that they all began to become classic Rock staples in my mind. There are ten songs offered, three being covers including FREE’s ‘Wishing Well’, and the record ends with their two supposed hits (sorry unknown to me – blame my local Rock station growing up), ‘Train Train’ and the passionate ‘Highway Song’ that crescendos into a fiery display of guitar soloing to finish the album. Listening back 34 years later I wouldn’t say they are any stronger than the other cuts offered, so if you like those but never picked up the rest of the album no worries as this rips through and through. I look forward to adding more releases to my BLACKFOOT collection, made easier by the recent Rock Candy reissues from the group. More information at: www.blackfootband.com, www.facebook.com/officialblackfoot, www.rockcandyrecords.com