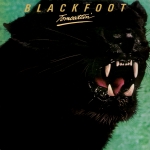 Are the guys from the Voices staff gone completely nuts now? A band like BLACKFOOT here? Whose only connection to extreme Metal is the word "BLACK" in the name? Yes! And with fuckin’ good reason! During the last years, retro Rock has become pretty popular in the Metal scene. Bands like THE DEVIL’S BLOOD, GHOST B.C. and many others seem to be hot shit and are featured and praised for their music. But I don’t know why, since most of this is just rehashed, second hand stuff from the past. If I want to listen to classic Rock music (and I often want that), I prefer the original bands from the 1970s and the early 1980s. Those bands were the real hot shit! One of these original old bands is BLACKFOOT, a Southern Rock band around since 1969. They are from Jacksonville, Florida, home of the real Southern Rock, since the famous MOLLY HATCHET also comes from this town. But don’t be mistaken – BLACKFOOT might not be as well known as MOLLY HATCHET, but that doesn’t mean they’re not as good as them. In their best times in the beginning of the 1980s, BLACKFOOT released great classic stuff that everyone into fine Rock should listen to. After their third album "Strikes" from 1979, the new decade saw the release of the great "Tomcattin’" album. Forty minutes of Rock from the South of the US that features all the variations of the topic you want. From the perfect opener ‘Warped’, a driving song with Boogie grooves that little band from Texas would love, over the Hardrocker ‘On The Run’ to the driving Blues inspired ‘Gimme, Gimme, Gimme’ – side one keeps up a damn high level of songwriting. Rick Medlocke’s vocals were brilliant, drummer Jakson Spires had the perfect beat and together with bass player Greg T. Walker, he laid the perfect base for guitar players Medlocke and Charlie Hargrett to shine. Examples needed? Listen to ‘Dream On’! But the B-side of the album offers more highlights as well. ‘Every Man Should Know (Queenie)’ is the Southern Rock way of a ballad, no kitsch, believe me (ballad??? – Frank)! And with ‘Reckless Abandoner’ BLACKFOOT show their relaxed and laid back side. THE HELLACOPTERS couldn’t have done a song like this better. With ‘Spendin’ Cabbage’ we have the perfect soundtrack for a relaxed ride with a 1971 Oldsmobile through the swamps of Florida. Slide guitars meet the grassroots – great stuff! I don’t know why BLACKFOOT never became as big as they deserved for this album, one of the best Rock albums of the 80s. If you haven’t already given these guys a chance, it’s never too late. And in case you don’t want to dig for the original vinyls – Rock Candy Records did a re-release series of the classic BLACKFOOT records, carefully remastered but without additional bonus tracks, at least not for "Tomcattin’". I don’t mind the missing bonus stuff, since I always prefer to listen to a full classic record in its original form, without added extras that in most cases aren’t much more than filler material anyway. So, Rockers, check: www.blackfootband.com, www.facebook.com/officialblackfoot, or the label: www.rockcandyrecords.com