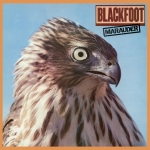 It’s BLACKFOOT time again! After I just wrote words of praise on the album "Tomcattin’", we have another remastered re-release of one of the classic albums from Jacksonville’s Southern Rock heroes. "Marauder" was the follow-up to "Tomcattin’", released just a year later in 1981. The band presented their hard rockin’ side a little more, yet they didn’t forget what made them special. So "Marauder" is on the level of its predecessor, and that means a damn high level for sure. The opener ‘Good Morning’ keeps the promise of its title: it’s a wake up call and rocks the day perfectly. After a fine southern boogie groover called ‘Payin’ For It’, BLACKFOOT come along quite balladic with the masterpiece ‘Diary Of A Workingman’, one of their best songs ever, that reminds of the mighty KANSAS, concerning the atmosphere created and the songwriting quality. A must-hear for all those younger ones as well! ‘Too Hard To Handle’ not only grooves like hell, the song has also some distinct Hard Rock hints and surprises with the use of Mariachi trumpets in the middle part, giving the song a more than unique note. After this sweating good mood rocker, we all deserve a little laid back tune, that makes us want to ‘Fly Away’, so jump into your ’73 Dodge and take a cruise! Side B opens up with two Southern Rockers of the finest kind, ‘Dry County’ and the flaming ‘Fire Of The Dragon’, that features those fiery guitar leads, that made BLACKFOOT stick out of the masses. But that’s nothing against the "kind of band anthem" ‘Rattlesnake Rock’n’Roller’. A banjo intro by Rick Medlockes grandfather Shorty Medlocke leads the way to a damn hot groovin Boogie song with a honky tonk piano and a guarantee for good mood. Finest stuff, indeed! The closing ‘Searchin” starts off a little cheesy, like an AOR ballad, but in the long run, Rick Medlocke and Charlie Hargrett unpack their six-strings and play some of the best Hard Rock guitars they had to offer. So we have tons of reasons to listen to this album, and if you liked "Tomcattin’", you’ll like "Marauder" as well. Again, this re-release features no extra material, and I don’t miss it either. By the way: thanks to Rock Candy Records for reminding me how great BLACKFOOT were in their high times. Check the band at: www.blackfootband.com, www.facebook.com/officialblackfoot, and the label at: www.rockcandyrecords.com