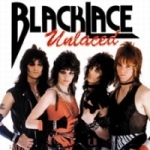 BLACKLACE was a female fronted New York based band that really kicked ass on this debut! Their "On The Attack" demo was proof this band had a nack for writing good uptempo Metal anthems alongside more in-depth guitar playing à la van halen and a great sense for arrangement! Leading off after the ‘spooky’ intro with ‘Call Of The Wild’ the "Unlaced" record just goes all over the place with some amazing songs probably put together during their many years before the album. There’s some overly heavy stuff like ‘Nightmares’ (love the ‘Zero The Hero’ sounding brooding riff!), and of course you must love the more ‘sing along’ and ‘polished’ songs like ‘Runner In The Night’ and ‘Hots For You’! Maryann’s voice is something I love (I do know a few friends who dislike it!). It’s rather ‘high’ at times but it works for me. The guitar playing is sizzling as mentioned and the whole band does a great job throughout. Good mix and production too courtesy of manowar’s Joey Demaio. I say this is a must own for anyone into classic Hardrock / Metal from the 80s! Being a fanatic for female fronted Metal I was so into "Unlaced" and awaited this follow up record with just as much anticipation! Opening track ‘I Like To Rock’ is everything I hoped this record would be! Energetic, powerful and convincing. Great opener! Second track (title cut) starts off with some male vocals courtesy of bassist Anthony Fragnito and turns into a ‘duet’ of sorts! Not really that good to me! Damn my first ‘dissapointing’ moment in a BLACKLACE record! ‘Speed Of Sound’ get sit back on track and has a kinda ‘Hot For Teacher’ VAN HALEN ‘vibe’ to it! Mostly due to the Eddie worship guitar playing of Carlo Fragnito! As the album carries on it truly hold up as a great folow-up to the legendary "Unlaced" record with some great written songs with good choruses and great messages. A must own indeed! Sadly the band didn’t ever ‘take off’ or make it, but we got these two classics combined onto one CD now to keep the spirit up! Invest and enjoy the call of the wild of BLACKLACE!