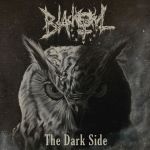 This excellent offering is the scorched and tarnished debut album of a French band called BLACKOWL, whose prior releases are only a demo and a split 10". It is not immediately easy to define their sound… Black Thrash Metal is, I guess, the generic label we might adopt, but they have a particular sound, with a lot of Rock’n’Roll and even some Punk. Still, they are firmly rooted in Metal, it is what they are, and I enjoy the result immensely. Perhaps we can throw some names as a general comparison such as BEWITCHED or BUNKER 66, but they do their own thing and very well. The opener ‘DeathRace’, clocking over 7 minutes, lays down the game to follow (well, actually all of their songs are around that length). A blackened vocal performance that befits the riffs this power trio invokes from the depths of Metaldom. Each member delivers the goods proficiently, and they often show what Black Thrash’n’Roll should ideally be all about. Not that they are extremely technical, but they are good and focused. Sometimes I am in awe of what the guitarist comes up with to roll over the strength of the rhythm section, such as the great leads and solos in ‘Dark Side’ or in one song that strikes me as particularly inspired… I found myself pressing repeat more than once over it. This is ‘The Deluge’, an absolutely magnificent track full of what makes Metal the best musical style in the history of mankind. What a total headbanger! They finish with a great rendition of ‘Soldiers Of Darkness’ from the debut EP of fellow french thrashers HEXECUTOR. France has been developing a strong underground Metal scene in the last few years and it’s good to see how close many of these newer bands seem to be. So this is a strongly recommended debut album from yet another great recent band from France… get it from www.facebook.com/blackowlmetal, www.forgottenwisdomprod.com