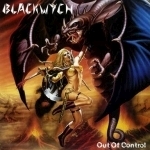 To be honest: I really wasn’t familiar with Irish Metal icons BLACKWYCH before, even though they released three full length albums between 1986 and 1989. "Out Of Control" is the debut by this quintet (created in 1984) from the green island and was originally put out by Metal Masters on vinyl only. It also seems that this record might be a rarity and sought after by vinyl collectors so it makes sense that it finally got its treatment on digital format for the first time. The music on this ten tracker is the typical sound you got by late NWOBHM outfits. Their material reminds me of the stuff which the obscure British Ebony Records label unleashed upon the headbanging masses in the 80s. Just think of bands from their roster like BLADERUNNER, TOUCHED, CHATEAUX, SAVAGE or GRIM REAPER. Especially the production of the album has some similarities with those releases due to the raw edge sounding Metal anthems with its galloping rhythms. The musicians do a great job and deliver some well crafted and decent tunes (good vocals and axes) which aren’t worse than material by other squads back in those days even you can’t expect something revolutionary here. It’s pure, honest and solid Heavy Metal (with a rocking flair) – nothing more, nothing less. This one should appeal to all worshippers of the NWOBHM cult. Hymns like the excellent uptempo title track, ‘Metal Mania’ or the hard rocking ‘Burning Down The Line’ could cause them sleepless nights and the epic cover artwork propably some wet dreams. www.slaneyrecords.com