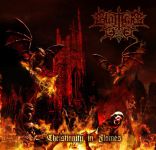 Although it may sound cliched and despite I have been reading this for countless times – but the four tracks (plus intro) really blew my mind and left me slack-jawed speechless. Aggressive Death Metal with killer riffs and even more killer guitar leads and solos. A vocalist reminding me of Glen Benton in his early days. Drums are performed versatile and varied but at the same time fast, fast, fast. Needless to point out that the bass-guitar does its job perfectly, which means making the four songs tight and concrete. The style can be compared to KRISIUN and HATE ETERNAL or, to be more specific, "Christianity In Flames" easily reaches the same level like the mentioned bands. Having in mind that BLAMES GOD are quite new (established 2016) to the scene and this is the first output, I simply could not believe it. But the riddle is solved when you take a look at the band member’s biographies. Founding members Pablo "Carcelero" Nanculao (guitars, vocals) and Rodrigo "Pilatvs" Marmolejo (drums) were active for about 15 years in DIABOLICAL MESSIAH and their band mates Marcelo "Nunviolator" Herrera (bass, lead vocals) and Jaime "Pacto" Vasquez (guitars) are anything but inexperienced, since they played in MALAFAS respectively IMPRECATORY. Amongst a never ending stream of new bands and projects the label Star Spawn Society discovered one of the most aspiring and promising Death Metal acts. Did I mention BLAMES GOD are hailing from Chile? No? Well, everyone knows about the fact that Chile is one of the Death Metal hotspots (some are convinced the hottest) on this planet and BLAMES GOD are another proof. More information at: www.facebook.com/blames-god-1029552863830907, www.starspawnsociety.com