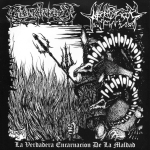 Here we have a split 7" EP by two Colombian bands and from what I was able to gather, they share some of the same members between them, so it is sort of an incestuous split, hehe. Anyway, thinking of Colombia mighty MASACRE springs to mind and besides them I haven’t heard any other band that sparked my interest during the last 25 or so years. And these two bands aren’t about to change that. BLASPHEMIAM on their track ‘Consargracion’ plays rather simple, mid-tempo oriented Black / Death Metal mostly led by a galloping rhythm section with rather uninspiring riffs but with good production, so maybe that’s the only positive element which can find here and that isn’t much in this day and age. NECROFAGOS sound pretty much the same on their 2 tracks, but play a little sloppier, even adding some punkier beats along very primitive Death Metal. I don’t know what’s the purpose of this release, both bands don’t even have official pages, same as labels, so this is like total underground stuff. In fact I think this EP was released by A. Hellbenller, who is the singer of both bands. You can try your luck to get this release by writing emails, altough it really isn’t worth the effort. Very generic and forgetable, that’s my final verdict. For all further info or ordering details you can contact: blasphemiam666@hotmail.com, necrofagosdeath@hotmail.com