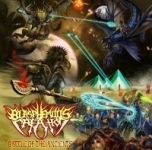 After a short spoken intro – added with a pounding drum beat and some sort of cheesy collection of supposedly outer space samples in the background, this furious horde from Nevada, USA, takes the command and slays us all. BLASPHEMOUS CREATION is back with a new album titled "Battle Of The Ancients", which contains 10 new cuts from this riffs-bursting, heads-exploding, venom-spitting and somewhat icy sounding 4-piece blackened Thrash Metal patrol. As if some well chosen adjectives would not be enough yet, by all means add such words as filthy, raw and brutal into the same pile too – just to describe BLASPHEMOUS CREATION musical entity a bit better even. To me, BLASPHEMOUS CREATION represents some of the best and most entertaining sides of blackened Thrash Metal, basically by keeping their stuff varied enough, churning out everything in between devastating and highly toxic walls of riffs – to more melodic passages that indeed do add a nice, welcome contrast into the songs on this record. There’s definitely some early DISSECTION in them, also bits and pieces from this Aussie Black / Thrash horde known better as DESTRÖYER 666, a little dose of MINOTAUR – and definitely small portions of IRON MAIDEN due to some more melodic sections that give more space to their songs to breathe better. Basically BLASPHEMOUS CREATION have got it all to rumble the ground under the feet of the fans of blackened Thrash Metal genre. As a single mention, BLASPHEMOUS CREATION’s vocalist and guitarist Isaac Wilson sounds like a young and angry Jon Nödtveidt (DISSECTION), which undoubtedly is something that the diggers of this particular genre in question may pay more attention to than they would normally do. If I was you, I would not turn my back on "Battle Of The Ancients". The album may be even better than my humble review for it suggests, so… More sheer blasphemies can be checked at: www.facebook.com/blasphemouscreationofficial – or at: www.myspace.com/headexploderecords