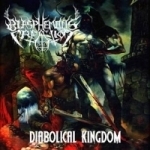 Let there be Metal… savage, all places thrashing – blackened Thrash Metal! Let’s enter BLASPHEMOUS CREATION whose debut album is like a crossbreed of SLAYER’s "Show No Mercy" and DESTRUCTION’s "Infernal Overkill" albums – spiced with vocalist and guitarist Isaac Wilson’s raspy and deranged vocal outbursts that partly also set the tone for the whole record. These fellows’ music is fast for most of the time – and kinda chaotic even at times but still the BLASPHEMOUS CREATION camp is able to offer a solid performance nevertheless. 15 songs may be a bit too much for a record like this, containing of over 63 minutes of material but then again as the band’s 4-track 2008 demo "Shadows Of Evil" is a kinda hard task to come by these days, it’s a good thing that all the songs from that demo have also been featured on this record. "Diabolical Kingdom" also sounds very much like it would have been recorded some 20-25 years ago, capturing the vibe and feeling of some dirty and aggressive sounding Thrash Metal releases of those days. I suppose that has also been one of BLASPHEMOUS CREATION’s main goals on the debut full-length offering of theirs. This is seriously a fuckin’ good and wicked old school shit; i.e. blackened Thrash Metal with lots of intensity and aggression packed into it – just the way I like it. Warmly recommended. For interested parties, go to: www.facebook.com/blasphemouscreationofficial